Applications for the US National Team and USNT Developmental Academy are now open through March 1, 2021. The USNT expects to compete in a 2021 IQA Continental Game.

The US National Team (USNT) will continue to utilize a standing team model in preparation for the 2021 IQA Continental Games. Due to the state of COVID-19 in the US and the risk it presents to players, the USNT will not be hosting training camps or any in-person tryouts during the 2020-21 USQ season. The application form and supporting documents/footage will be the only method in which to try out for the USNT and the USNT Developmental Academy (USNTDA).

The next round of drop/adds from the USNT roster and the 2021 USNTDA class will be released in early May. The application is due March 1. During the application process, the coaching staff may request supplemental video footage of the applicants completing specific, timed workouts or drills to compensate for the lack of quidditch in the US in 2020. These requests will take into consideration access to equipment and other parties (including safety concerns) that may be necessary to complete the requests.

Athletes will be able to apply for both the USNT and USNTDA via the same application.

The requirements outlined below apply to both USNT and USNTDA applicants unless otherwise noted.

While the IQA has not updated their eligibility requirements for the upcoming IQA Continental Games, we are currently working under the assumption that they will remain the same as they were for the recent IQA Pan-American Games. Every National Governing Body (NGB) or Emerging Area may set their own criteria for who can compete on their team, however, at a minimum, athletes must:

AND at least meet one of the following requirements:

The additional national team player eligibility requirements for USNT athletes are as follows:

USNT applicants must meet at least one of the following requirements:

USNTDA applicants must meet at the following requirements:

Any athlete that meets the aforementioned requirements is eligible to try out for the USNT and/or USNTDA. In order to apply, applicants must be willing to agree to the necessary waivers and provide written commitment to various requirements:

All applicants for the USNT and USNTDA are required to submit three unedited recordings of official USQ or MLQ games in which they have played by March 1 at 11:59 pm ET. Fantasy games, mercenary games, or games against official teams deemed unofficial will not be accepted. The footage must meet the below requirements:

During the application process, the coaching staff may request supplemental video footage of the applicant completing specific, timed workouts or drills to compensate for the lack of quidditch in the US in 2020. These requests will take into consideration access to equipment and other parties that may be necessary to complete the requests. 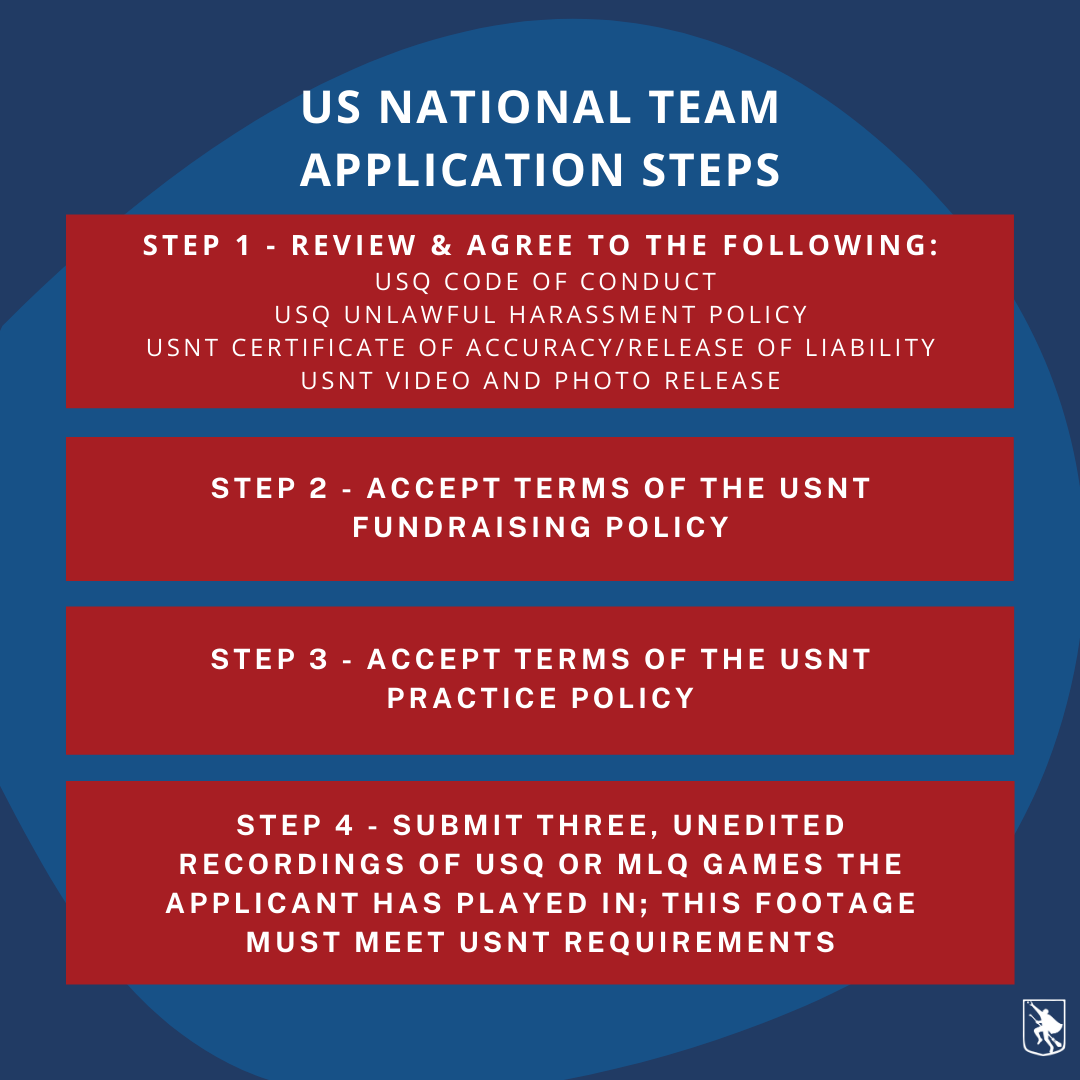 The USNT will not be hosting training camps during the 2020-21 USQ season.

Once the 2020-21 application process closes on March 1, the USNT head coach and USNTDA head coach will meet with their appointed coaching staffs and scouts to discuss applicants. There will be cross-communication between the two staffs. The USNT coaching staff—with the USNT head coach having the final say—will then select a roster of athletes to be eligible for USNT tournament consideration likewise, the USNTDA coaching staff will select their next USNTDA class. The USNT and USNTDA have no obligation to hit a minimum or maximum number of players at any point. No athlete on the USNT standing roster is guaranteed play time or a tournament roster spot at any point during their time on the USNT standing roster. While there are designated periods for mass adds and cuts, the USNT head coach and the USNTDA head coach may add or cut a player at any point they deem necessary.

Given the lack of a 2020 MLQ season and the lack of events to scout during the 2020-2021 USQ season, the coaching staff may ask scouts to review submitted footage in addition to asking them specifics about what they recall of applicants and their performances in past seasons.

The following tournament roster rules are expected to be enforced at IQA events:

In addition to meeting the aforementioned player eligibility requirements, adhering to the signed policies and exhibiting the actions and attitude of a role model within the community, USNT and USNTDA athletes are expected to complete workout requirements set by the coaching staff and attend closed training camps.

While training camps will not be held during the 2020-21 USQ season, USNT and USNTDA athletes should expect to participate in an on-site, week-long training camp at the IQA Continental Games location, following suit with what was done for the 2018 IQA World Cup and 2019 IQA Pan-American Games.

Keep an eye on the USNT Facebook, USNT Twitter, and the USQ Instagram for year-round updates for the USNT and USNTDA. For questions, email USNT Coordinator Amanda Dallas at amanda.dallas@usquidditch.org.

The USNT and USNTDA are seeking a number of new volunteers, including a USNTDA coordinator and assistant coach and a USNT social media assistant. To learn more, check out the Volunteer with USQ page.