June is Pride month, and to celebrate we shared stories of a few LGBTQIA+ quidditch community members.

The new Pride inclusive flag, which includes black and brown stripes representing BIPOC, as well as pink, white, and blue stripes in a nod to the Trans Pride banner. The flag was designed by Daniel Quasar in 2018.

In June, USQ highlighted Pride Month, which is a time to celebrate the LGBTQIA+ community. Pride Month is also about reflecting on the catalyst that was the Stonewall Riots in New York City in 1969, which led to a larger LGBTQ+ rights movement to create positive change. As part of this spotlight on Pride Month, we interviewed six different quidditch community members on our social media channels. Here is an excerpt from each interview. 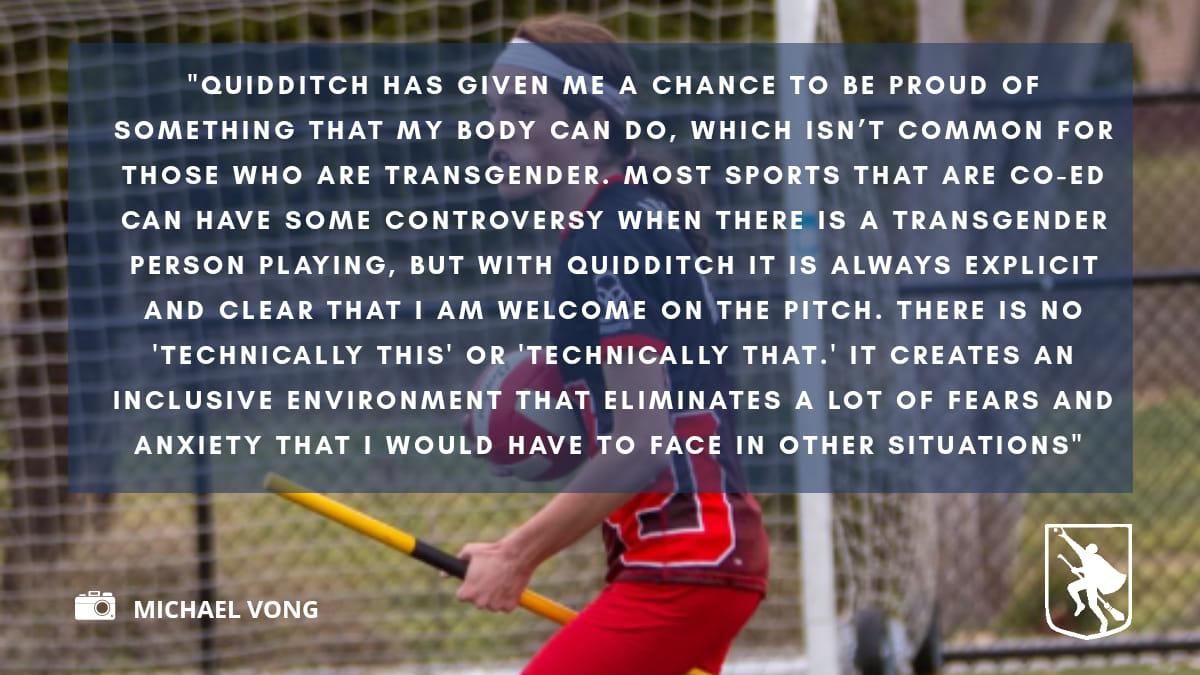 “Quidditch has given me a chance to be proud of something that my body can do, which isn’t common for those who are transgender. Most sports that are co-ed can have some controversy when there is a transgender person playing, but iwth quidditch it is always explicit and clear that I am welcome on the pouitch. There is no ‘technically this’ or ‘technically that.’ It creates an inclusive environment that eliminates a lot of fears and anxiety that I would have to face in other situations.” - June Anderson, a player on University of Utah Quidditch 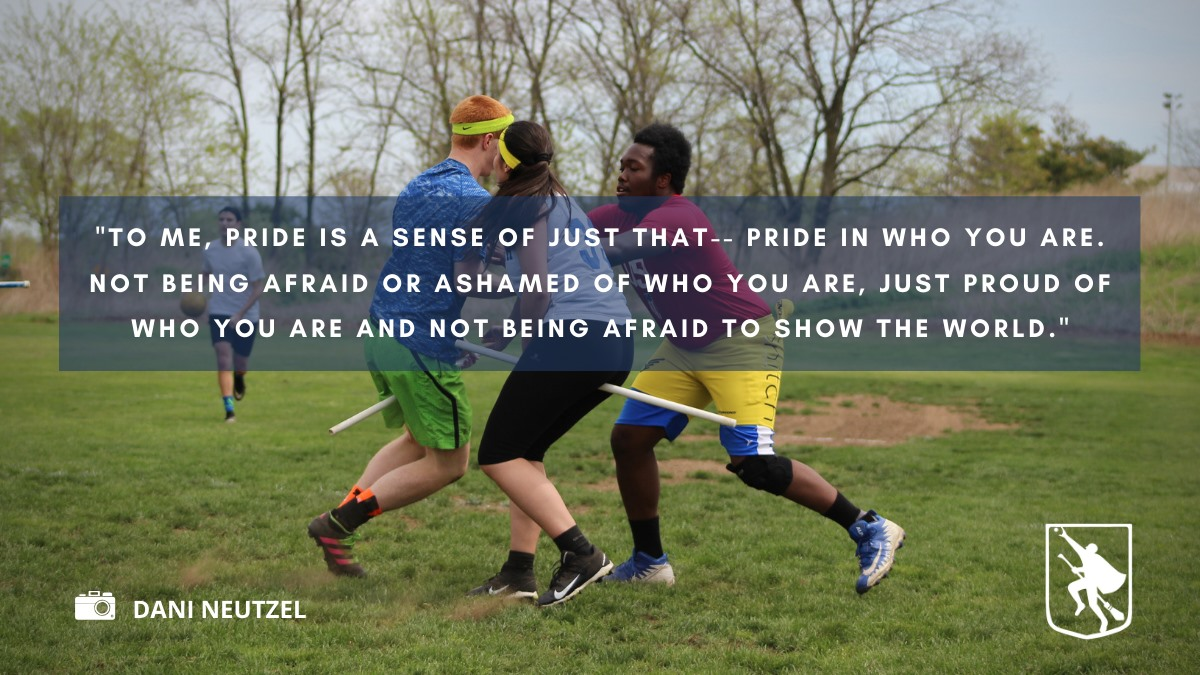 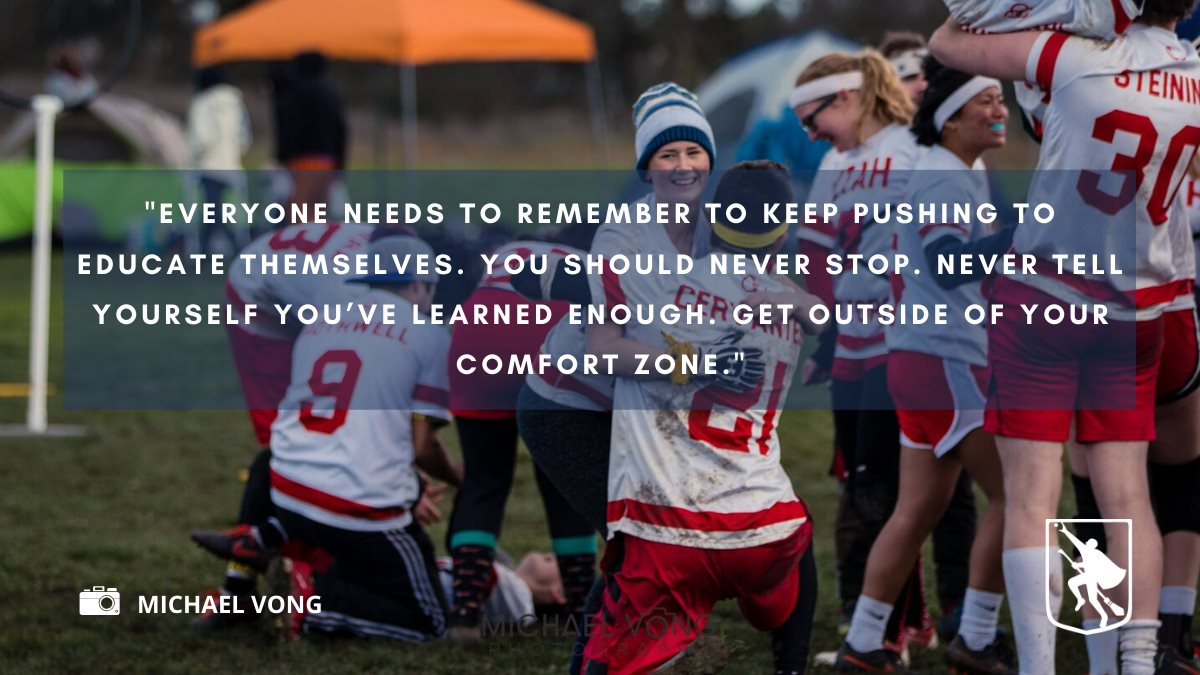 “Everyone needs to remember to keep pushing to educate themselves. You should never stop. Never tell yourself you’ve learned enough. Get outside of your comfort zone.” - Samantha Huston, event volunteer coordinator for US Quidditch 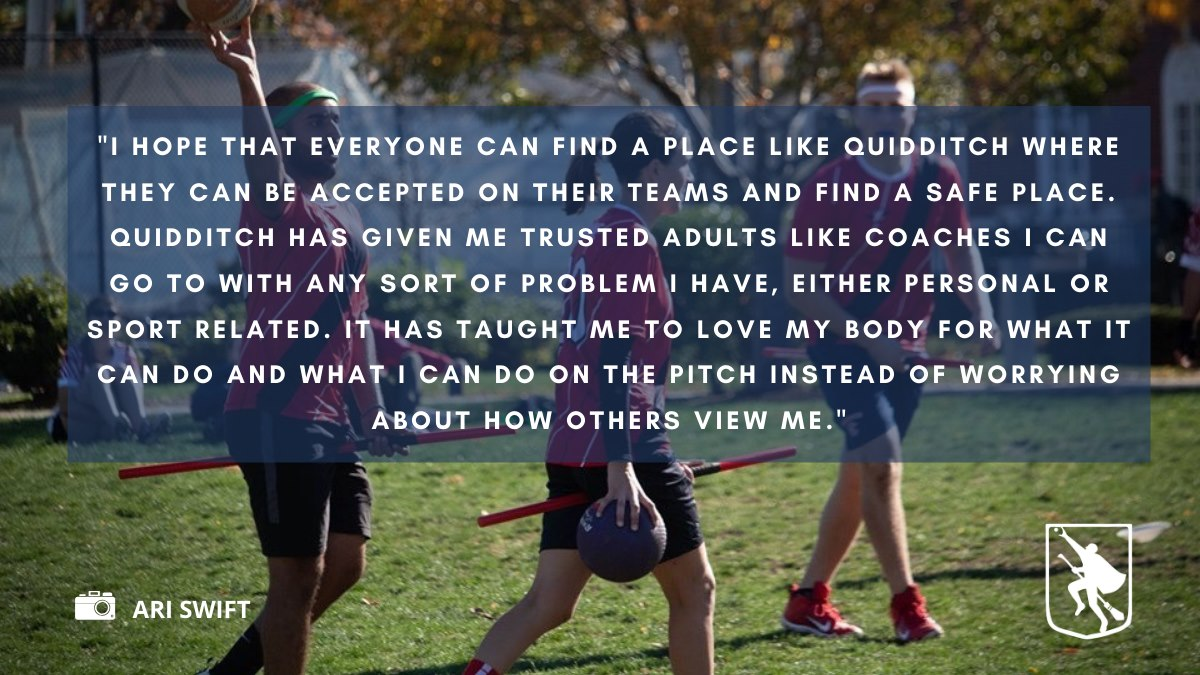 “I hope that everyone can find a place like quidditch where they can be accepted on their teams and find a safe place. Quidditch has given me trusted adults like coches I can go to with any sort of problem I have, either personal or sport related. It has taught me to love my body for what it can do and what I can do on the pitch instead of worrying about how others view me.” - Meg Romine, a player on Boston University Quidditch

“The best thing to me is being a former community player and coaching a college player — it is so rewarding. The memories I have from WCV are forever, and I want others to have that, so bringing quidditch to Omaha feels good and has made some very impactful relationships. Quidditch is a very white sport, but at Creighton, of the 65 players I’ve had, 40 have identified as POC. I am so proud to have a team that is minority majority, as having a team that represents diversity is very important to me. It’s a family, and being able to coach that is the best part.” - Curtis Taylor, a coach for Creighton Quidditch 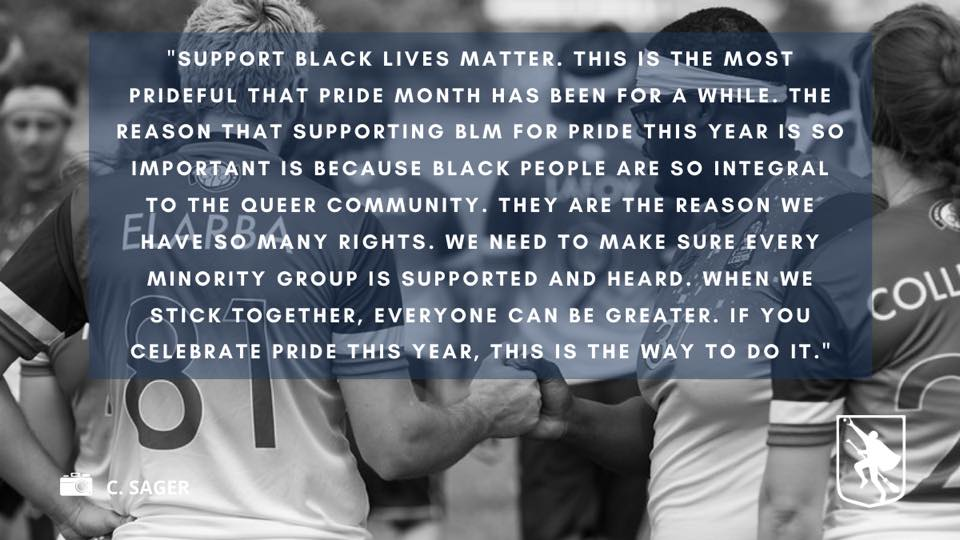 “Support Black Lives Matter. This is the most prideful that Pride Month has been for a while. The reason that supporting BLM for Pride this year is so important is because Black people are integral to the queer community. They are the reason we have so many rights. We need to make sure every minority group is supposed and heard. When we stick together, everyone can be greater. If you celebrate Pride this year, this is the way to do it.” - Carlos Elarba, a coach for Texas A&M

The Role of Black LGBTQIA+ Activists

To celebrate Pride Month even further, we featured several Black LGBTQIA+ historical figures on our Facebook page. These individuals were actively pushing for change and rights for the LGBTQIA+ community through their words and actions. Their activism, along with the work of others, paved the way for a sport like ours to exist, one that allows people of all backgrounds to be accepted and valued on and off the pitch.

Lesbian activist, educator, and author Barbara Smith led the way on feminism for the Black community, ultimately paving the way for the field of Black women studies to be introduced in the United States. In 1974 she founded Combahee River Collective, a black feminist organization that addressed the needs of minority women excluded from other women's rights movements. The work of Barbara and other Combahee River Collective colleagues led to the defining of an inclusive political analysis for contesting the interlocking oppressions of race, gender, class and sexuality - known today as intersectionality. Her work has been an inspiration for individuals and movements committed to battling both external and internal oppression.

James Baldwin was an openly bisexual novelist, poet, essayist, playwright, and social and political activist. He’s regarded as one of the most influential writers of the 20th century whose works grappled with race, class, and sexuality during a time when these topics were not widely discussed and highly criticized. In 2017, one of his unfinished manuscripts, 'Remember This House', was expanded upon post-mortem into the Academy-nominated documentary, 'I Am Not Your Negro'. Following that, in 2018 Barry Jenkins adapted one of his writings, 'If Beale Street Could Talk' into an Academy Award winning picture.

A transgender woman and LGBTQ+ rights and AIDS awareness activist, Marsha P. Johnson was integral in the Stonewall Riots. In 1969 during one of the many New York City raids, Marsha pushed back against the police and protested on the front lines following a raid of the Stonewall Inn. This marked the beginning of what we know as Pride today. These celebrations would not be possible if not for the courage of Marsha and other trans women of color who stood up for their community. She also founded the Street Transvestite Action Revolutionaries (STAR) which is considered one of the first LGBTQ+ youth shelters in North America.

Marsha has been getting more recognition in recent years, and there has been renewed focus on her untimely death in the wake of a current epidemic of transgender deaths worldwide, most of them transgender women of color. In 1992, following that summer’s pride parade in New York City, Marsha’s body was found floating in the Hudson River. While her death was originally ruled a suicide, in 2012 authorities later changed it to “drowning from undetermined causes.” For those wanting to learn more, the 2017 documentary The Death and Life of Marsha P. Johnson talks about the continued fight for justice for Marsha.

Commemorative Month Spotlights in the 2020-21 Season

As we mentioned in our statement in support of Black Lives Matter in June, USQ will be continuing these commemorative month spotlights. We will be posting a list of upcoming spotlight opportunities later this summer. For questions about this series or about our diversity and equity work in general, please email strategicplanning@usquidditch.org.