US Quidditch is proud to present part two of our new special feature for our #savequidditch campaign called ‘USQ Stories’.

US Quidditch is proud to present a special series for our #savequidditch campaign called ‘USQ Stories’. Community members have sent us their first hand accounts of how being a part of this sport has had a tremendous impact on their lives. This article features two stories which focuses on the family that these storytellers found within the quidditch community. We thank everyone who has taken the time to share their story with us. We encourage you to also read our other stories featured in ‘Quidditch As A Safe Space’. 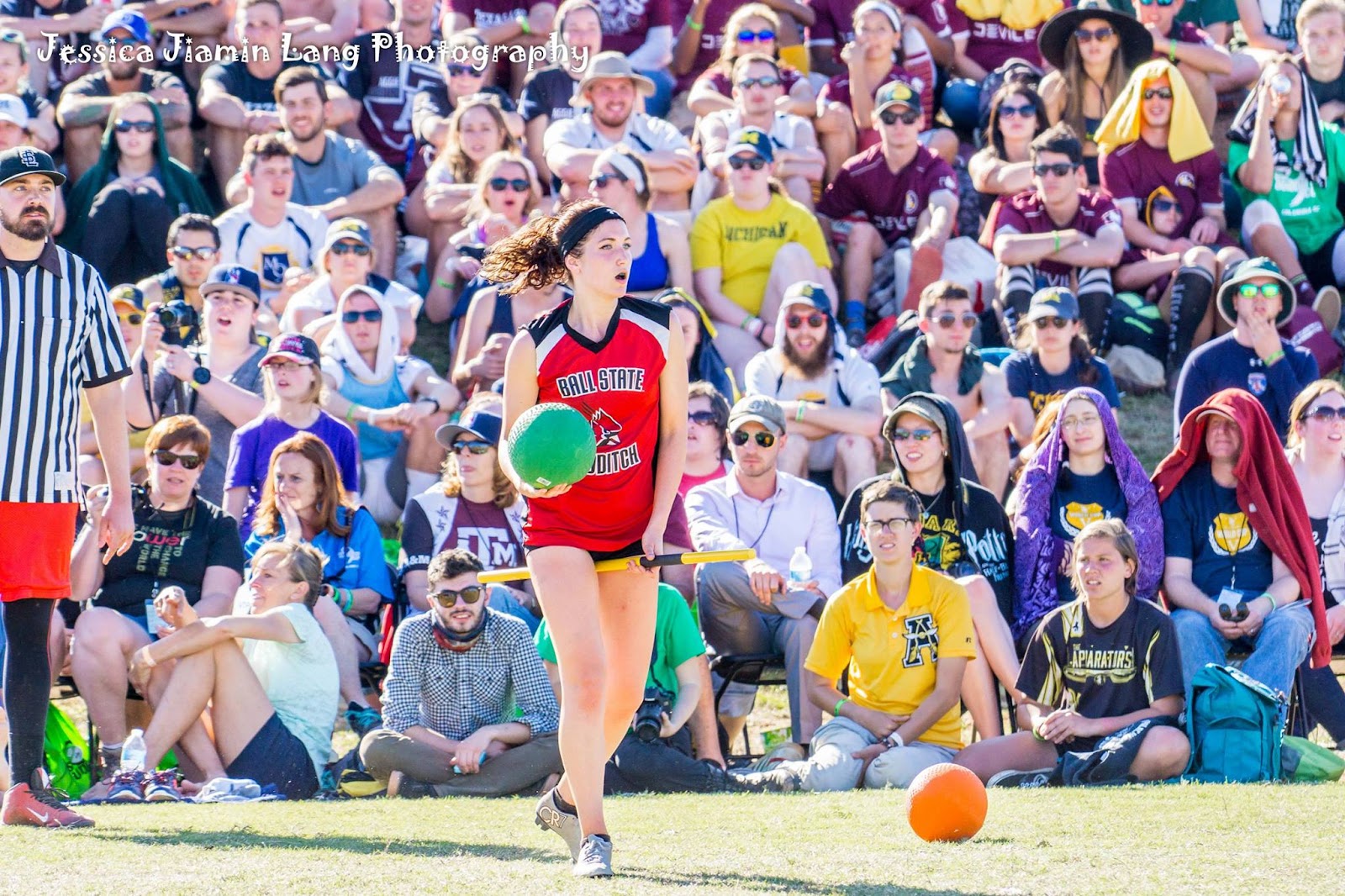 At the start of my freshman year of college I sought out a group that could be my family for the next four years. That group would be the Ball State University quidditch team.

Every moment of every day was spent with them once I found them. We had practice or workouts four days a week. We held get-togethers at the quidditch house and our couch would often house some player passing through on their way to a tournament. In our freetime, some of us would go to the local park to work on our agility or throwing forms. In the downtime between official tournaments, we planned carpools to travel to fantasy tournaments in Texas, Missouri, Ohio, and Michigan. If we weren’t playing quidditch, we were talking about quidditch. We held impromptu film sessions for games and tournaments we didn’t play in and board game nights quickly devolved into heated discussions about the latest USQ rulebook (I wish I was kidding).

When the time came for US Quidditch Cup 9 (my junior year) we loaded up in a tour bus and before I knew it we were warming up for our first game of the day. After a particularly rough loss to Rutgers Quidditch at the end of day one, I was feeling tired and a little down. I was hoping to make it to the Sweet 16, but I wasn’t sure how the next day would go.

As our team huddled up for the first game of day two the captains spoke to our team. This was it. Everything we’d been working for all year–all the film sessions, the 3 AM tournament wakeups, the injuries, the practices, the wins, the losses–were for today. We couldn’t just talk about wanting to go far in this tournament–”we have to go out on that field and prove that we want it badly enough to lay it all out and win.” I added something that I felt was most important. “You aren’t playing for your coaches. At the end of the day, you’re going to look down the sidelines and know that you’re playing for the person standing next to you. You’re playing for every person on this team who put in the time and effort to get us here.”

Our Sweet 16 game passed in a blur–I remember our keeper scoring the first point in our game against Texas Quidditch, and I remember watching three sophomores on our team match the Texas offense point for point. I remember sprinting out of the game during SoP to sub for my teammate and almost blacking out once I reached the sidelines. I was so exhausted, I didn’t even see Jason Bowling’s snitch grab. By the time the whistle blew to signal the end of the game, the field was already covered with people–we were the first team to beat Texas at nationals since 2011, and, because of it, we moved on to the Elite Eight. Our mentality was just, one game at a time. “Survive and advance” was our mantra that day. Every game that we went into, I knew I would play my hardest but told myself, “Well this is it. This is as far as we'll go.”

Making it to the Final Four was a surreal experience that’s hard to put into words. After winning against The Lost Boys, we were exhausted–my toes were bleeding and busting out of my cleats and every two feet we walked we were congratulated by choruses of “Ball So Hard! Must Be State!” from people I didn’t even know. Between games my teammates and I scoured the field looking for lost mouthguards, filling up water bottles, and laughing about the insanity of what we were experiencing.

Finally, our game against Rochested United started. We did what we had promised we’d do and left everything on the field. But this time, when the whistle blew for the final time, it was Rochester’s seeker holding the snitch, not Jason.

I remember crying as the whistle blew–but not out of disappointment. I was proud. Matt Brown, our head coach, walked over to me and pulled me up. My roommates Tyler Walker and Jason were already discussing the catch next to me, while Blake Fitzgerald nursed his nose–he had broken it three games earlier. Two of our younger players, Luke Lipps and Nick Kaufman, somehow had more energy and were already planning our comeback victory in US Quidditch Cup 10. As we lined up to shake hands with Rochester, I knew I had given everything possible and I knew my teammates–my family–had done the same.

Don’t let others miss out on this life-changing experience. Donate to US Quidditch today and help us #savequidditch.

Erin is a player, referee, and volunteer who has been involved with quidditch for seven years.

A Player in the Quidditch Community

First semester of college felt like a Herculean trial: there were the silent battles with roommates, the stressful flurry of dropping and adding classes, the devastation when yet another attempted friendship falls through, the prejudice for being an “art” major in a STEM-heavy school, and the many long, sleepless nights wrought with the misery of feeling wholly, completely, alone.

Things started to change though when I made my way to a quidditch game night. Upon arriving, I realized it had been organized as a get-together for the team after they hadn’t seen each other from the prior semester. I was the only newcomer. An interloper. I felt bad for intruding upon this special time and was about to leave. However, I was spotted by the president of the club, asked to sit down within this circle of friends, and was warmly accepted for however long I wished to stay. When I left that night with the promise to see them for practice, I felt lighter than I had in a very long time. I had finally felt welcome.

At Saturday practice I relearned names–Jon, Skylar, Maggie, Eddie, Fausto, Ariella, Ryan, Yuzuka – and I was taught the rules of the game. Running around on the freshman quad with a broomstick between my legs, merging with the team, I was taught the meaning of happiness and how good it feels to be included. I tried to never miss a practice or a tournament, no matter what. Saturdays became a light in the dark. They were stars that I would reach for every week, getting closer with the chant it will all be better by practice.

And it was. Every practice I grew as a player and grew closer to people who I could call my friends–my family. Every road trip to tournaments gave me ample time to bask in the craziness that wild, close friendships from weird, misfit people can create. On late-night drives we told round-robin stories to stay awake. Each one of us saying only one word to continue the tale on how the magical chameleon would escape his murderous love-triangle with a parrot and a dolphin. On the pitch, we protected our own. There were screams of encouragement when I made my first fast-break score, and when one of us was injured every able body and open hand rushed for water bottles, ice, a medic (if needed), and acted as one overbearing mother hen. At home, after practice, we always had a team lunch filled with bizarre existential questions and rants over The Bachelor. On a weekend, if one of us performed in a special event, we made the commitment to be in the audience for support. We celebrated the holidays together. We loved each other. Quidditch became my home.

Even now, in the middle of a global pandemic, we haven’t lost touch. There are Zoom dates, texting, and snapshots of life shared over social media. The first semester was hard, and this current isolation will be harder, but I’m confident now that even distance cannot break the love between us–what builds our quidditch home.

I ask you to help me #savequidditch, so others can find their home with quidditch.