USQ is proud to announce the release of its strategic plan.

USQ is proud to announce the release of its strategic plan. USQ Board President, Jacob Adlis, explains, “Having gathered input from all of USQ’s various stakeholders (players, coaches, volunteers, referees, snitches, fans, and partners), we have developed a comprehensive plan to guide the organization’s actions over the next three years.”

This plan will guide decision-making, resource allocation, and prioritization of work. USQ’s fiscal year runs from July 1 to June 30, and this plan encompasses July 1, 2015 through June 30, 2018.

As USQ is currently in the midst of an executive transition and search, we worked with our executive search and transition consultants at Loveall Price & Associates to make sure that this strategic plan is consistent with the results of their organizational assessment of USQ and complements the 18-month transition and operations plan that they are helping us draft to guide our new leader.

Continues Adlis, “In addition to providing publicly defined goals and strategies that will be used by our staff and volunteers to drive day-to-day decision-making, the 2016-2018 Strategic Plan will allow our new Executive Director (once hired) to step into a role with clear organizational direction and support. This is an exciting time in USQ’s development as an organization, and we look forward to continuing to develop the sport and provide events of the highest quality in the coming years.” 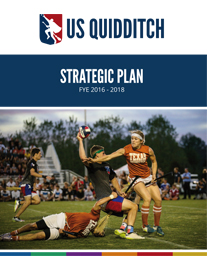 As part of the strategic planning process, USQ also examined our mission and values statements.

These discussions led to the adoption of a new mission statement:

“US Quidditch is the national governing body for the sport of quidditch. USQ advances the sport by organizing events and programs that build community and empower all genders to compete together.”

These changes were made for several reasons. First, it is important to us to explicitly state that we are the national governing body for the sport of quidditch, putting us in line with our peers such as USA Ultimate, US Lacrosse, and USA Rugby. Secondly, our former mission statement, “USQ governs the sport of quidditch and inspires young people to lead physically active and socially engaged lives,” was succinct but not precise. There was confusion about what “socially engaged” meant, and whether “young people” even applied to college students.

In drafting a new mission statement, we decided not to place any limitations on who we serve, and we decided to directly call out what we do and why it matters: organize events and programs that build community and empower all genders to compete together.

USQ also adopted its first vision statement. A vision statement is one sentence that describes the clear and inspirational long-term desired change resulting from an organization’s work.

“We envision a future where every person in the United States is aware of quidditch as a sport and has opportunities to play and engage at all levels.”

After crafting new language for USQ’s mission and vision statements, reaffirming our values, and creating an identity statement (see page four of the strategic plan), we decided that this messaging was stronger and clearer than the language of the three C’s -- competition, community, and creativity. “Competition” and “community” both feature in the new mission statement, and the concept that “creativity” was meant to evoke is captured in our values. To simplify USQ’s messaging, we will no longer use the three C’s.

In October 2014, USQ’s board of directors empowered a strategic planning committee to create a plan determining US Quidditch’s strategic priorities for the next three years. This process became even more important when founder and CEO Alex Benepe and COO Alicia Radford announced their departures from the organization in April 2015. This strategic plan will give USQ’s new executive director a roadmap, and allow for a smooth transition to the new leadership.

This plan was developed over the course of ten months, and takes into account the feedback of multiple stakeholder groups:

To read a one sheet version of the plan that outlines our three strategic priorities and goals, click here.

How to Navigate Team Leadership Transitions

Barnes, Liou and Mansfield are Spring Referees of the Month

USQ Ending Season Due to COVID-19

US Quidditch Temporarily Suspending Season Due to COVID-19

At Large Bids and Gameplay Details for US Quidditch Cup 13